Skip to content
What is CoastSnap, how are photos taken and what happens to the photos sent in?

We would like to answer these questions, present the progression of the last year with your pictures and show how we evaluate the pictures and what results we were able to achieve. In order to support the transdisciplinary research in the Gute Küste project, to promote the interaction between science and citizens and to show the daily dynamics of ebb and flow, we want you to actively participate in the investigation of the renaturation measure in the Langwarder Groden in Butjadingen. By taking photos and sharing them with us, we receive valuable data that make a substantial contribution to research. The more data we receive from you in the form of photos, the more closely the development of the Langwarder Groden can be followed and studied. In addition to one-time visitors, residents and daily walkers are invited to share their valuable photos with us. These data will then be analysed according to scientific standards. The resulting findings will be documented and made available to the public on this site. This creates a so-called Citizen Science approach – “citizens create knowledge”. 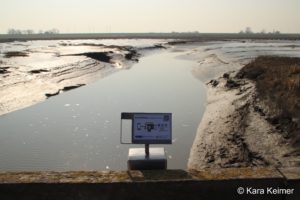 Example of a CoastSnap-Frame
CoastSnap is a project originally from Australia that uses a citizen science approach to record changes in beach areas. Since 2017, photos have been taken of coastal regions in more than 20 countries to observe the dynamics of the landscape. Here in Langwarder Groden are Germany’s first and only CoastSnap frames. However, research is not being carried out on the beach here, but rather the growth of salt marshes is being documented and the dynamics of sediments influenced by storm surges, seasonal effects or tides are being studied. In order to be able to compare the images from the different mobile phone cameras, the incoming images are subjected to a post-processing process.

How can you participate in this research?
Simply position your smartphone on our CoastSnap frames and take a photo without filters or zoom. Are you happy with the photo? Then send us the picture by e-mail to coastsnap@gute-kueste.de, stating the date and time, or upload the photo to the cloud here. Of course, you can also share your photo on social media, but please make sure that it is public. Very important: Add the hashtag #CoastSnapLangwarderGroden to your photo. If you send us the photo via email, you can also take part in our competition. 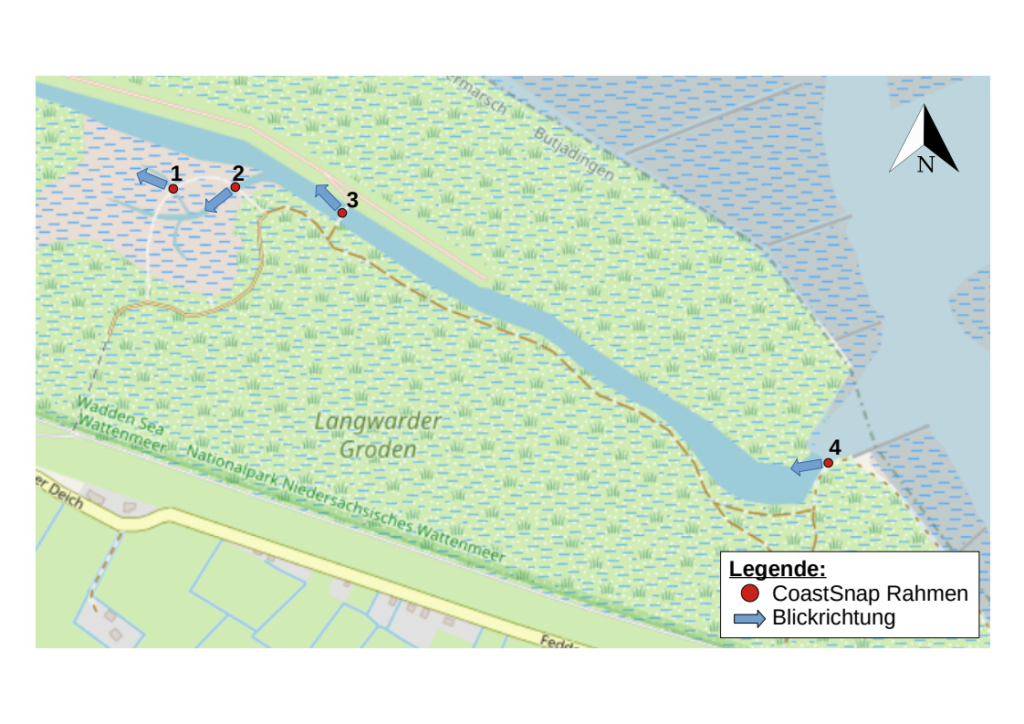 Position of the four CoastSnap frames within the Langwarder Groden
Competition and survey
First of all, we would like to thank you for becoming active as citizen scientists and providing us with the basis for the monitoring project – with data in the form of mobile phone recordings. This increases the quality and significance of the results. Among the incoming recordings, quarterly prizes are raffled off to create an additional incentive. In addition, a survey has been created to increase your chances of winning and to share your CoastSnap experiences. It is completely anonymous, takes only 3 minutes and helps to improve accessibility. Click here to access the survey. If that’s not enough, check out the other frames as well, because every picture from another frame gives you an extra chance to win.
How does CoastSnap work?
In order to be able to use the data quantitatively, for example in the form of a measurement based on the image data, they first have to be processed. For this purpose, fixed reference points in the field of view of the corresponding image section were measured with a GPS device. Subsequently, individual image points depicting the fixed reference points were assigned to the world coordinate system WGS 84. Through this transformation, the image section ultimately represents a bird’s eye view. Based on this procedure and georeferencing, distances in the image section can be measured so that, for example, the areal development of a salt marsh can be determined from it. 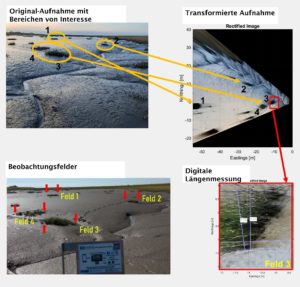 Steps for editing the CoastSnap photos
Results
Monitoring using the CoastSnap frames has shown that individual salt marsh fields have expanded within one vegetation period and that individual plants have become larger. This method makes it possible to quantify the spread of salt marshes in the field and to document the emergence of new vegetation areas. For example, the studied salt marsh islands grew 40 – 90 cm horizontally from March to September 2022. The lateral area development and spread of the salt marsh vegetation (field lengths) play a role in this regard, as they contribute to wave attenuation and erosion reduction and thus make an important contribution to regulating ecosystem services in coastal protection. However, a final answer to the question of how the two-dimensional salt marsh growth in Butjadingen behaves can only be given in the coming years when the positions and areas of the salt marsh fields can be compared with those of the initial year. Only then a statement can be made as to whether the growth will develop sustainably or whether the expansion gained during a vegetation period will be lost again over the storm surge season in the winter half-year.